The LA Kush Cake strain is bred by Seed Junky Genetics and combines Kush Mints and Wedding Cake to deliver an absolute powerhouse of a strain. The Wedding Cake strain is also a product of Seed Junky Genetics and is a clone of the only phenotype of Triangle Mints. As far as the Kush Mints go, it’s Animal Mints crossed with Bubba Kush. These are some legendary strains all used and combined to create the LA Kush Cake strain.

It has been grown in soil, not to till though but in soil nevertheless. Looking back to the genetic history of this strain, it looks like that a lot of the strains that went into the LA Kush Cake are Indicas. Based on that it is safe to assume that this is an Indica-dominant strain that we have on our hands. Strains like the Wedding Cake and Bubba Kush have really strong Indica-genetics.

This is why you can expect a nice, strong, body-led high from the LA Kush Cake.

What is the Appearance of the LA Kush Cake Strain?

The piece of the LA Kush Cake strain is an Indian Buddha branding, and the packaging and the jar are really nice. It keeps the weed fresh and nice and sealed, even possible for reusing it. The bud itself is absolutely dripping in trichrome. Actually, I’ve noticed that a lot of the Seed Junkies strains look like they have a massive trichrome coverage.

It looks really strong, and almost bright in appearance just because of the trichrome coverage. It kinda adds some sort of a white double color, which is a great addition to the dark green.

The trim job is done really well. There are little bases, but they are purple. It is nice to see when they make a bud look really nice like this. The LA Kush Cake has some nice development and it looks really healthy. It is not quite completely stacked upon each other and I’m really liking it appearance-wise.

All the buds from the jar look really similar. It has a unique shade to it and does not look like the green color of most of the strains of cannabis that I was able to see. It is some really cool stuff. 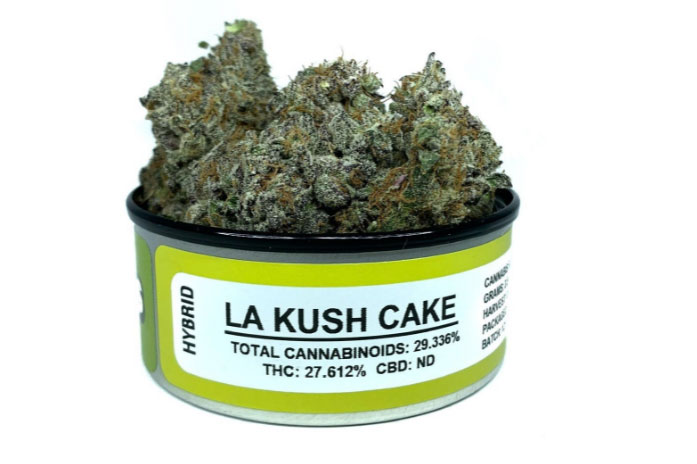 Smelling the LA Kush Cake from the jar to see the aroma notes coming through, I would say that it smells quite lovely. That captures both the Wedding Cake and the Cookies and I think all the way back to the Afghan heritage of weed. It’s got a kind of a light pungency and a strong gas, but not as nearly in the same way as the Holy Grail Kush.

It has good levels of gas to it. It is earthy and has those classic OG-type hints as well coming out from it but creamier. But when I broke it open I got a deep skunky pungency coming right out of that bud. It has that classic, old-school, skunk number one type that literally spanks you in the chops.

I like the inside of the bud as it is dripping in trichrome. It has some bits of purple and it looks generally nice when you break it open. But it is very offensive when you put it up to your nostrils. It is a galloping, let-you-know-it’s-here type of scent.

I can say it right now, the LA Kush Cake strain gets top marks on the smell.

When I was preparing to taste the LA Kush Cake, I noticed that it is very dry so there is a lot of stickiness that will manifest itself as strength. When ground up, the pungency fills the room and has a very strong smell and I do love the smell of this strain.

I decided to try two consumption methods, through the bong and with a vape.

Through the bong, the LA Kush Cake has a really lovely flavor coming through it. It is strong and trichrome heavy and a little bit expansive when you breathe it in through the lungs. But it is very smooth, cool, and delicious.

The flavor of it comes through nicely. You don’t get it all through the bong, sometimes the flavor can be a little bit lost that way. But you do get that piney, gassy, OG-type flavor nevertheless.

It hits instantly, you can feel it almost immediately. The LA Kush Cake is a strong strain and is well up in the 20% making the THC see kick in very fast.

But let’s put some in the vape. And it tastes wonderful! It has a lovely vaper taste. I should say that it captures a lot more of the Wedding Cake side of the flavor. It is lovely and tastes delicious. The taste from the vape is very nice as well, but I do have to say that it is really strong. 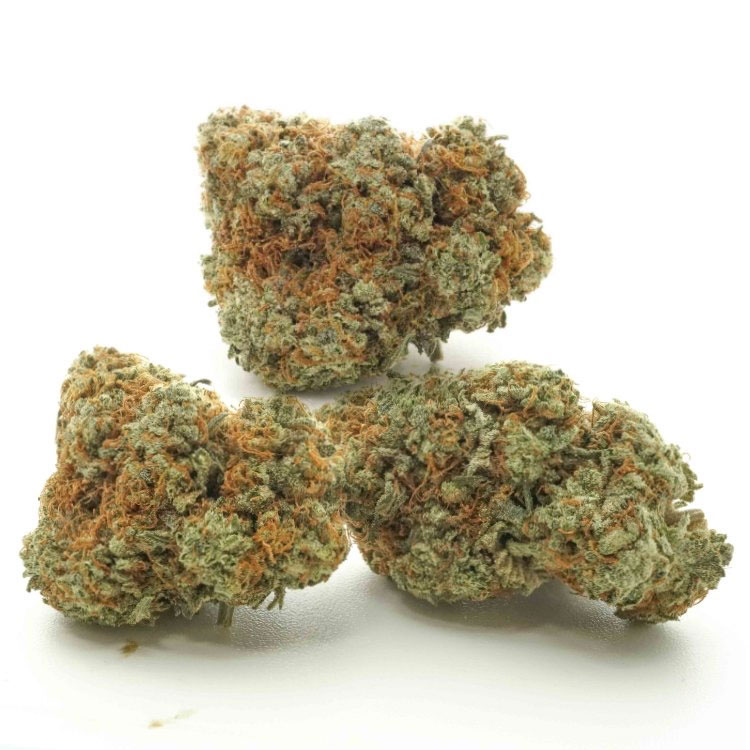 The LA Kush Cake Strain is definitely on the Indica-side. I feel myself slowing down and I can feel my body relaxing and it makes me just want to chill. It is a full-on relaxer of a strain and a great weekend smoker. It is something to enjoy when you don’t have a lot to do, maybe when you are isolated by yourself would be best.

It kicks in fast and it kicks in hard. It is a nice Indica body-led strain so it is expected to do that and will make you feel happy.

I really had a great time with the LA Kush Cake strain and it offers a great smoke. It was one of the strongest strains I had in a while. Appearance-wise, I really liked the look of it and resembles a lot of the previous Seed Junky Genetics strains that I tried. The smell is delicious, it has an old-school OG-type of a smell. But it is only when you break it open when it goes straight into your nostrils. It is super offensive, super pungent, super skunky, and just has a really nice scent to it.

Taste-wise, the notes come through the bong really well as well as through the vape. The effects kick in quite fast and I was very chill when smoking it and it was a really nice smoke.