Today we talk about the Tropic Heat cannabis strain which comes from Inhouse Genetics.

Tropic Heat is a combination of OG Kush Breath (OGKB) with Purple Punch strain. OGKB is said to be a distinct phenotype of Girls Scout Cookies, but it is not certain as there is no confirmation about it being so.

The Tropic Heat is another Indica-dominant strain and is sure to be good. There are a lot of Purple Punch crosses and it has some really good genetics. Purple Punch itself is a cross between Larry OG and Granddaddy Purple which gives us that great, purple, fruity, Indica-dominant effect. 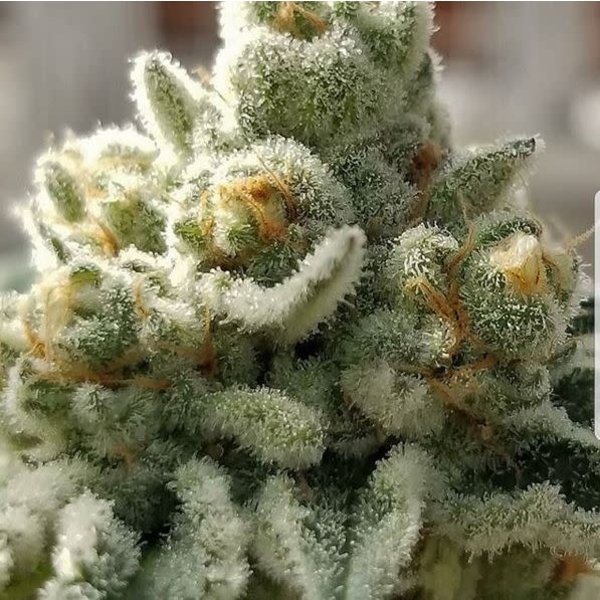 Looking at the bud of the Tropic Heat cannabis strain in detail the first thing you notice is that the buds have been trimmed really well. They have a kind of a boutique look to them like pured dried flowers.

The buds are presented in a lovely way. They are really light in coloration. Particularly when you shine a flash on them the buds go almost white and they glisten a lot. At the same time, the pistols punch through with a deep orange hue but the color is a lot lighter than some other cannabis strains.

It is nice and developed without being overly beefy. Each bud has got a nice look to it. It simply looks organic and clean and all in all like a really nicely grown bit of bud.

There is a hint of silver color without any distinct leaf basis and some good development on the calixes. The buds also have a small structure to them and are not those really big nugs that you would see elsewhere.

Putting your nose to the buds of Tropic Heat cannabis strain you will notice light and fruity note. It actually does not give an awful lot of smell as it is now.

But when we break it open we get a whiff of a really nice mix. The Tropic Heat strain does not smell as you would expect it to smell, being that it is a cross between OGKB and Purple Punch.

It still smells fruity but there is a lack of pungency to the smell. You can smell a bit of grape or wine and some additional notes that are not really clear. It is like a fruit salad. There are several notes coming at you all at once and you can’t distinguish which is which. There is a little bit of pineapple and some mango and all sorts of fruits actually that is just popping at the same time.

Interestingly, the smell does not come out that much even after you break it open. Even though the smell is fruity and super interesting. The fruity side probably comes from the Purple Punch side of it as it is a fruity type of a strain. There is a little bit of MOAB (Mother of All Berries) there.

But now, moving on to the taste of Tropic Heat. 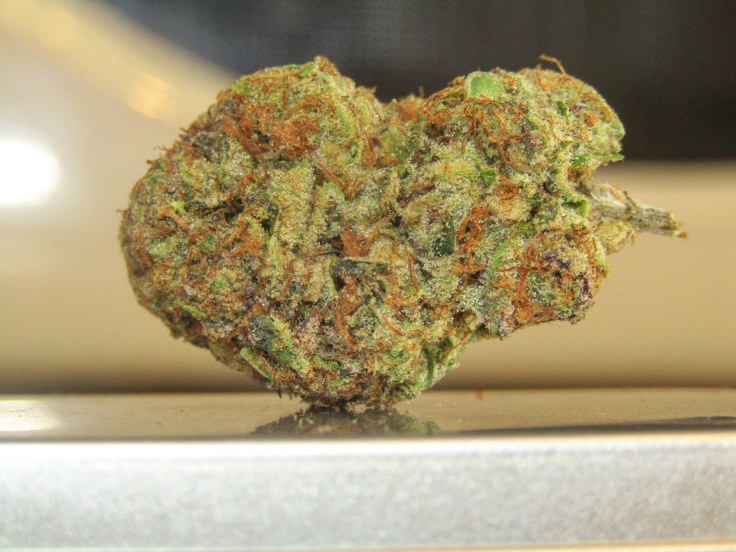 To determine the taste of the Tropic Heat cannabis strain we are first going to take a hit of the bong. On the first hit you get a hint of the tropical fruitiness in the flavor, but only just a bit. It is actually a really good smoking experience. But the bong does not give the best impression of the flavor, so if you really want to feel the taste of Tropic Heat, we suggest using the vape method.

But when you taste the Tropic Heat strain using the vape you start seeing where all of those fruity notes come from. You can actually taste the pineapple, the mango, and a kind of a tropic nature of it all. Using the vaporizer is a really nice consumption experience and does come with a lot of fruitiness with this strain. There is no hotness and it does not bite you on the lungs.

Generally speaking, the Tropic Heat taste has a fruit salad flavor which is very unique and comes with a nice flavor profile. It may not be your favorite flavor profile but it is different and distinctive enough to be notable. All in all, very good marks as far as the flavor section goes.

Using the Tropic Heat in a pure joint also has a really nice taste to it. There is a niceness to it and it is a very good smoking experience particularly with the tropical flavor of the strain.

The initial effects of the Tropic Heat cannabis strain will make you feel a bit light on your feet. The feeling is being relaxed, but actually it is much more like being slowed down. The cogs have definitely stopped turning not as fast as they usually do.

This is really a hybridy sort of stone actually and makes you start thinking intrinsic thoughts. There is no light sensitivity by any chance now but you will get dry mouth very quickly. But there is a good chance the light sensitivity effect will start to kick in.

It is really nice and will definitely help you slow down particularly if you feel high-paced as it will definitely reduce that. There is a definite head high with the Tropic Heat cannabis strain.

This could be a good day time Indica-smoke but does come with less of pain management.

The Tropic Heat is a very nice day time smoke and comes with an Indica-side slowing down effect which fells. It will definitely make your day and will help you get the pace down if you were in a rush.