The next entry in our review series is the Sherb Crasher strain. The one that I got was grown by Indian Buddha growers. There are actually more phenotypes of this strain, but the Sherb Crasher #2 is the phenotype that has been kept. This strain combines Sunset Sherbet and Wedding Crasher and it is bred by Seed Junky Genetics.

The parents of the Sunset Sherbet are the Girls Scout Cookies and the Pink Panties, while the Wedding Crasher itself is actually Wedding Cake crossed with Purple Punch, which is one of the strains that I am really familiar with. 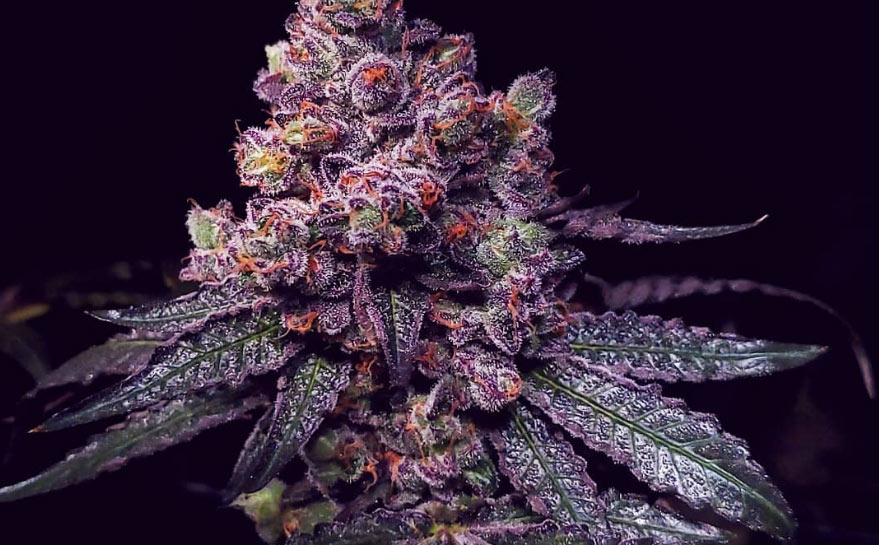 The Appearance of Sherb Crasher Strain

First of all, the glass jar that the Sherb Crasher strain comes with looks really good and high quality. Inside you will notice the plastic lid and you can see the Indian Buddha logo, which I really like the look of. Inside, of course, are the buds themselves.

This one has an absolutely mad look to it. The colors are not the colors that you would expect when looking at a sample of cannabis buds. This is more purples and different shades of green with hints of orange in there as well when you shine a flash on it. But not the traditional green or nuclear green that I tend to see with a lot of cannabis strains.

The Sherb Crasher has received a unique look to it. The complexity reminds me of the Girls Scout Cookies but it’s got the trichrome coverage of the Wedding Cake. But the bud structure definitely resembles the Sunset Sherbet. It is really interesting to see the genetics of the parents coming quite nicely.

The buds have been given a fairly good trim job. I can still see some bases but they are all bright purple and blue. The bud that I have has a nice bud structure and is very dry actually. It is completely dry and cured properly which you can tell as well from the texture of the plant. The pistols are coming through and some leaf bases are lighter underneath than they are on top.

The Smell of Sherb Crasher Strain

The Sherb Crasher strain has got a really nice smell, which is to be expected based on its parents. This one has a light fizz mixed with a type of rosey aroma. There are a lot of smells, it is really complex. The terp profile that is coming out of it is a nice mixture of sweet and sherbet notes. There is a lot of fizziness coming from it.

The sherbet hints are coming through really nice. And it adds more sweetness and almost creaminess coming through. It is really rich in terms of smell.

But when breaking the bud, it has got a nice earthy and pungent aroma that fills out my nostrils which comes in addition to the fizziness. The terpene profile in this one is phenomenal. It has been given a nice dry and cure, which allows me to get all of those different aroma notes. The difficulty comes with it being so complex so it is hard to pinpoint different terpenes coming through.

Flavor-wise, smoking it through the bong, the Sherb Crasher delivered a nice mix of fizzy sweetness along with some pungency that came through. You can almost taste it but it tastes differently from how it smells. The flavor is translated into a nice smooth earthy exhalation of the bong and there are some hints of the fizziness coming from the aroma.

Now I tasted it through the vape, and I can’t believe it but the vape has got a proper Cali taste to it. It reminds me a lot of Gelato #33. The American sweetness is influenced by candy flavors which give a fizzy sensation creeping along with the tongue. The vapor gets ten out of ten from me.

You get sweetness in your mouth like you just eat some syrup. This one also has some Purple Punch in it, based on its grandparent lineage, and I also started to get some hints of some purple and berry. 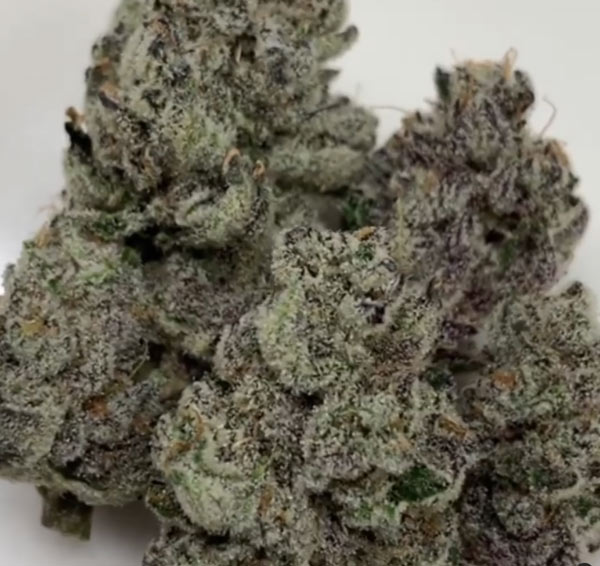 What are the Effects of the Sherb Crasher Strain?

The first effect of the Sherb Crasher strain that I noticed was warmth on my forehead. Which is something that I usually get with body-led strains, like Purple Punch or Lavender. I am also feeling nice in my forearms, which is a bit weird. The lights are looking super-bright but my mind is not really slowing down.

The Sherb Crasher strain is a really strong one, but I think that it is kicking in somewhere in the middle as a hybrid strain. With a hybrid strain, you get both sides of the spectrum, and this is something that is certainly present here.

My mind is feeling lifted, a little bit cheaper but my body is where I feel it a lot. It is also kicking in fast and there are waves of it washing over me. I feel a little bit like I am in a dark room with a bright light shining at me, which is a clear indication of how strong this strain is.

The Sherb Crasher is not one of the coolest strains that I’ve smoked it comes slightly hot but the flavor comes nicely.

I really enjoyed the Sherb Crasher, it has been a fantastic strain to smoke, and it is really strong stuff. It has got a nice distinct look to it with some blue hints to it. The smell is a mixture of sherbet fizziness. The flavor is particularly nice through the vape with fruity hints but smoking it made it a little bit hotter than some other strains. It is not a super smooth smoke, you should know.

As far as the effects go it is a nice and a little bit different high. It comes with some visual trippiness to it, which is slight and only noticeable for a few minutes. My mind still feels relatively normal and I really liked the Sherb Crasher strain.