Today we are going to take a look at the Ice Cream Cake cannabis strain. This one is a cross between the legendary Gelato 33 and Wedding Cake strains.

Both the parent strains are considered legendary in the smoking world. The Wedding Cake is more on the Indica side. It’s got that really sweet vanilla frosty type taste. On the other hand, the Gelato 33 has that gassy deliciousness to it.

People expect effects from both spectrums and a lot of that heavy-hitting high coming from both the Wedding Cake and the Gelato 33. 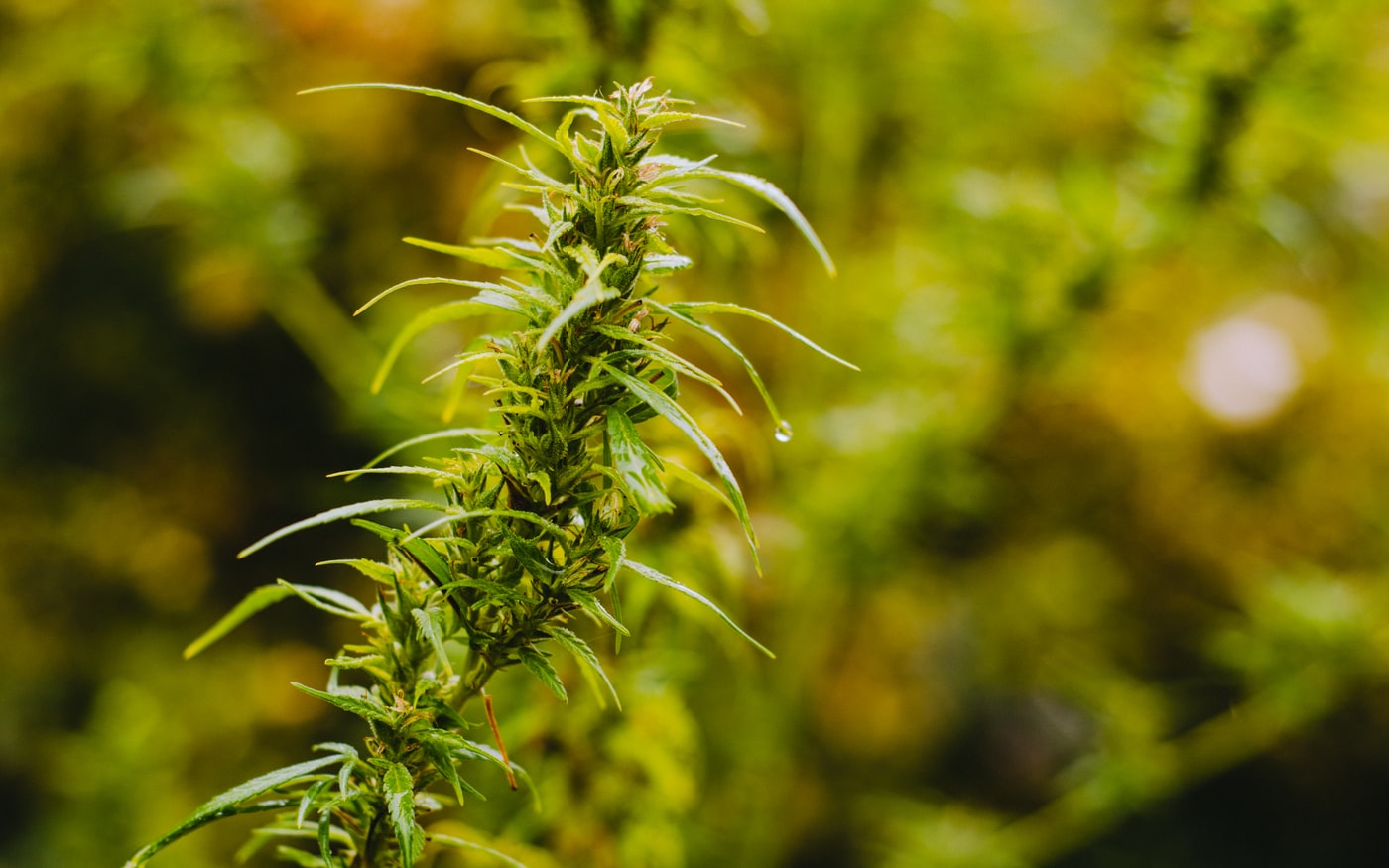 What is the Appearance of the Ice Cream Cake Cannabis Strain?

Immediately upon looking at the Ice Cream Cake cannabis strain, you would give it 10 out of 10. It has got this frosty, white look to it. The trichomes are in such abundance and it significantly alters the composition and the appearance of the bud. It looks like it has been dipped in vanilla frosting, which reminds us of the Wedding Cake strain. But it also has this lovely stacked calyx.

The bud structure is delicious looking and there are consistent nugs all across the sample. The trim job is also really good. The frostiness also means that they also had to trim down quite a lot of trichomes in order to get all the leaves off. But it generally looks like a quality bit of bud.

The coloration is really light-colored. There are some patches of darker green, which are presumably the basis of the leaves before the excellent trim job. The pistols are reasonably sized and are not particularly long and wild. But the pistols are much more in abundance compared to some other cannabis strains.

So appearance-wise, the Ice Cream Cake looks like a very lovely piece of bud.

How does the Ice Cream Cake Cannabis Strain Smell Like?

Initially, the Ice Cream Cake cannabis strain has this dank, gluey pungency to it. There is that piney, earthy but also a majorly gassy sort of an aroma coming off it. It gives some hints of what it’s going to be like and gives this offensive undertone that reminds us of the Gelato 33.

But there is also the sweetness of the Wedding Cake as well. Chemically, levels of gassiness are what you experience the most. It is very strong indeed and smells like an OG as it has that sort of richness and pungency.

When opening the Ice Cream Cake you definitely notice a skunky, gluey smell. There is that chemical burn smell from some specific Gorilla Glue strains. There is this interesting mourish smell that is quite difficult to put your finger on.

What does the Ice Cream Cake Cannabis Strain Taste Like?

Hitting the Ice Cream Cake cannabis strain through the bong allows you to feel the nice flavor that it has. It is also a really nice and smooth smoking experience.

You notice the strong flavor as you go and there is a little bit of the pungency creeping through. But the cleanliness is major. Really impressive right off the bat.

But when vaping it the sweetness is leading and there is a little bit of gassiness. It is a really nice one, especially with the sweet, frosted pungency. 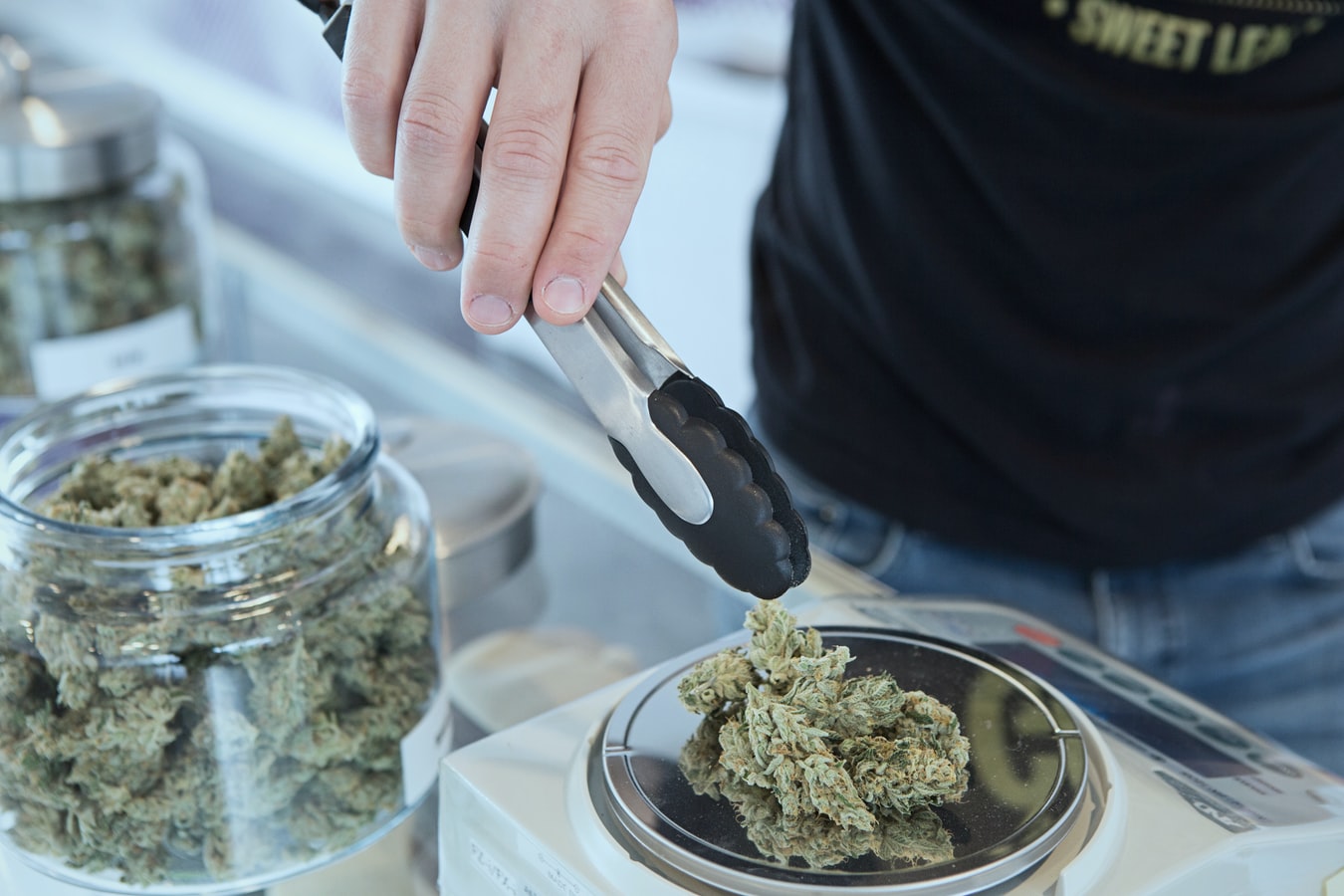 What are the Effects of the Ice Cream Cake Cannabis Strain?

The Ice Cream Cake cannabis strain definitely feels like a good one to smoke during the day time. Even though it comes from two heavyweight strains, it does not feel particularly strong. The first thing that you feel is a hybrid, Indica-led type of stone creeping up the body. But on the first go, you are not going to be specifically inebriated.

A slight visual sensitivity is also going to be noticeable. Chattiness is also one of the effects which is definitely something that comes from the Sativa side.

The Ice Cream Cake will make you feel nice and relaxed but not overly inebriated so it really does make it a good one to consume during the day. Perhaps on a nice and sunny day when ice cream is usually consumed.

When you smoke Ice Cream Cake, the high begins with a rush of happiness and a feeling of ease. Soon after, the Indica dominance makes you feel relaxed both physically and mentally. This is a great strain to smoke if you want to kick back in your chair or couch and totally relax after a long stressful day out in the real world.

Because this strain provides both a relaxed state and a sense of happiness, it’s often shared at parties and other social events. It’s also a strain that prompts you to eat, making it great to offer before serving food at a dinner party. Because this strain increases the appetite, people suffering from appetite loss often use it to trigger themselves to eat.

Is Ice Cream Cake a Good Strain to Grow?

Ice Cream Cake is not an easy cannabis strain to grow from seeds. However, since this strain boasts a high yield, many growers do find that this strain is worth the trouble to grow. The full-grown Ice Cream Cake plant is dense and develops compact nugs at up to 4 ounces for every foot of height it grows. Without question, this strain gives you more smokable bud than you get from many other strains.

It’s considered somewhat difficult to grow because it requires a hot climate and is prone to developing problems like fungus, mold, and mildew on the stalk and leaves. Because this strain is susceptible to these problems, it’s imperative that it’s protected from excess moisture.

If you live in a hot climate you can try to grow this strain outdoors. Otherwise, grow it indoors using a high quality grow light and ventilation system. This plant needs plenty of airflow and light in order to protect it from excess moisture. You can expect the plant to reach maturity at around 10 weeks when grown indoors from a feminized Ice Cream Cake seed.

With its relatively high THC level that can soar well over 20%, Ice Cream Cake is a coveted strain that people enjoy smoking. Not only does smoking this strain of cannabis guarantee hours of happiness, but it’s also a strain that has a relaxing effect, helping you unwind and chill out.

Ice Cream Cake is the kind of marijuana buzz that can get you soaring to a nice happy high right after you smoke it to a high that makes you just want to kick back and relax an hour or so later. This dual-effect makes Ice Cream Cake a strain many people seek out. If you’re looking for a strain that’s fun and relaxing to smoke, you won’t be disappointed by the sweet high Ice Cream Cake provides you with!

To summarize the highlights of the Ice Cream Cake cannabis strain, the appearance is probably the best part. It is one of the best looking pieces of bud that we have ever seen. The smell is also pretty good and it does whiff dank and the pungency that comes off it is really good.

As far as the taste goes, we suggest consuming it through the vaporizers. You can really feel how delicious it tastes that way.

The smoking experience is pretty pleasant and when combined with the effects which make you feel nice and relaxed, the Ice Cream Cannabis strain is definitely one for the books and for consumption during the day or night.