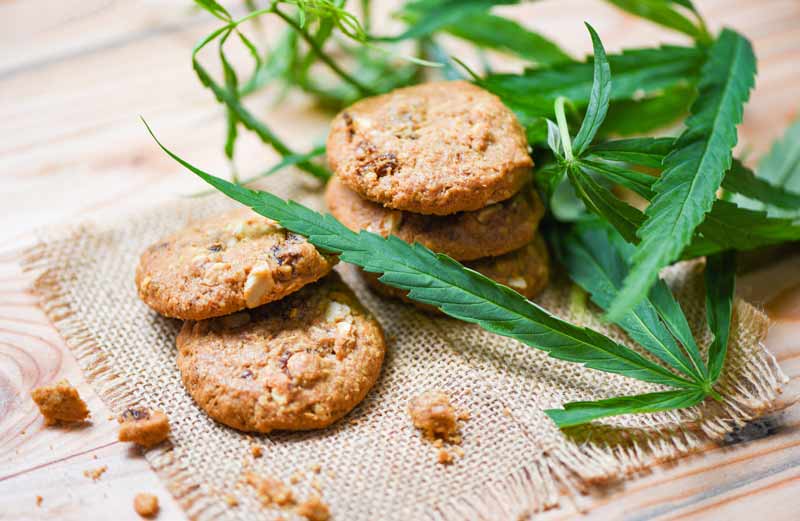 Cannabis edibles are food products that contain active ingredients of marijuana. It’s most popular in the form of brownies or gummies, and unlike smoking, it doesn’t pose a risk to health. When it comes to the kick in, cannabis edibles may take longer than other cannabis products, but its effect may be more intense and last longer. Note, however, that many factors can come into play to this as well.

The typical kick in time of edibles is around 30 to 60 minutes. The onset time mainly depends on the ingredients in the food product. With a high THC dosage or concentration, the “high” could hit quicker. On the other hand, it is harder to identify the kick in time of CBD-only edibles as it is not psychoactive.

It would also depend on how your body breaks down the edibles before absorbing it into the bloodstream. When smoking or vaping, the active compounds are instantly absorbed into the bloodstream and the brain. That is why you can feel the effects kick in almost in an instant. Meanwhile, the metabolization process of edibles happens differently.

With chewable edibles, it undergoes the intestines and onto the liver before being absorbed by the bloodstream. Thus, the effect is not immediate. The liver must be able to digest and metabolize the compounds first for the effects to kick in.

Meanwhile, for cannabis edibles such as gums and lollipops, the absorption process is “sublingual.” The effect kicks in faster because rather than swallowing it, you only ingest them. The absorption happens from the mouth’s mucus membrane, which we refer to as sublingual absorption.

Others Factors that Affects Cannabis Edibles’ Kick in Time

As mentioned, there are other factors that can affect the kick in time of edibles. These are usually lifestyle factors, physical makeup, and components of the product. It includes:

The effects of edibles may kick in slower or faster. Generally, when you eat a chewable edible, it will take longer to take effect because it will first be absorbed in the digestive system. The active ingredients will travel to the bloodstream and then to the liver. Afterward, the active ingredients are metabolized, and it will return to the bloodstream and enter the brain, which the high will most likely occur.

But there are instances when a chewable edible will kick in at a short time. If you eat edibles with an empty stomach, it might kick in faster because it will quickly enter your bloodstream. When you eat a meal after eating an edible, it can push the edible down quickly to the digestive system. Hence, if you want your edibles to take effect immediately, eat it with an empty stomach, then consume something else after 10-15 minutes. To have a more potent high, pair your cannabis-infused food with fats like nuts, butter, avocado, cheese, or high-fat dairy.

Edibles may also take effect quickly if you have an increased metabolism. If you have a fast metabolism, your body can digest the edibles faster and get the impact of a high in an instant. The same effect also goes with having a balanced diet. To enjoy the effects of edibles, you may consider building up your metabolism. However, the results cannot be seen overnight. It may take a lifelong commitment to speed up your metabolism.

Edibles mostly come in small dosage like a gummy bear or capsule, but they have bigger servings like a brownie bar. While the recommended dosage for an edible is 10 mg, it may be tempting to eat the half or the whole brownie. The effect will be more likely to result from a high if you ingested a more significant amount of edible or if the edible has a high THC concentration. Be cautious about ingesting edibles on a large dosage as it may be detrimental to your health.

Women and men have different outtakes on cannabis edibles. Studies show that women are more cautious about choosing the right edibles, considering their conditions, such as menstruation, pregnancy, chronic diseases, sleep problems, etc. Women are also usually recommended to take a lesser amount of cannabis in food.

The edible’s effect has a different impact on men as well. They may take a higher dosage of edibles because of their body mass because they may not immediately feel the effects. But, as mentioned earlier, taking in large doses may experience adverse effects, such as sperm production problems.

How Long Does the Effect Last?

Unlike when smoking or vaping, the effect of edibles lasts much longer. The duration can last from 6 to 8 hours. The factors listed above also influence the period of edibles’ high. Furthermore, chewable and swallowed food products are more likely to last longer than cannabis products absorbed orally.

The peak of the effect would typically occur at around 3 hours. That’s the time when you will feel most high as the results are more intense.

If it’s your first time taking edibles, it would be best to start with a small dose. Gradually increasing the dosage can produce your desired high better. Also, once you’ve taken a dose, you must wait at least a full 24 hours before taking another. If you don’t feel it kicking in after 30 minutes, it doesn’t mean that it’s not going to kick in. It would still depend on the factors stated above on how long it can take effect.

Note that taking an excessive dosage of edibles can have adverse effects on your body. Give it enough time to kick in.

Organic Snacks You Can Easily Make at Home

CBD for Anxiety: How Can It Help?

How Long Does it Take for Cannabis Edibles to Kick in?